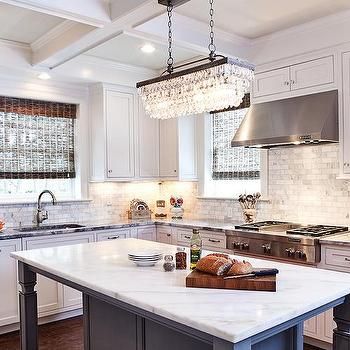 KITCHEN LAMP IDEAS – Kitchen chandelier refers to chandelier-inspired pendant lights that glow in a kitchen. This lighting style originated in the classic era and was mainly used for elite kitchen owners.

Despite the old age, the lighting concept remains popular with many. They believe that the lighting style in their kitchen immediately creates a noble taste. Find out from the list below how this has been firmly believed so far.

In general, chandelier creates classic and classic feelings for a kitchen. Some homeowners don’t mind spending a huge budget to purchase such an antique and exquisite kitchen chandelier for the ultimate in vintage and beautiful lighting.

This kitchen is undeniably full of vintage accents and the chandelier lighting is no exception. Large and robust, the lighting looks expensive with the metal bracket. The lighting consists of six small lamps that look like candles.

The lighting is rounded off by the beautiful holder, which, as a first-class kitchen classic, offers added value for the entire kitchen.

You can focus on the shape of the candle, which actually resembles the lamp. For a luxurious tone, the lighting is complemented by the crystal-like decoration under the candle. The same appearance appears from the main holder.

The chandelier hangs on the kitchen ceiling and looks lush. It shines in the entire kitchen, which is painted white.

The example shows us that chandeliers can look trendy and modern.

The bird’s nest uses the thin, silver metal that is painted red. It turns out that the entire light color corresponds to the colorful breakfast nook. As you can see, there is a colorful abstract painting hanging on the kitchen wall.

The breakfast area with the blue chairs and pink cushions is also colorful. Very pretty!

The lamp covers use the dotted brown material with the red edges. They are supported by the strong and old metal bracket. The holder style looks very classic. The combination of the two aspects results in a cute look.

The kitchen chandelier fits into this modern vintage kitchen. It would be too much for the kitchen to choose the chandelier model as described in the first point.

What makes the chandelier pattern so alluring is related to the material. The crystal-like material increases the value of the kitchen chandelier. In addition, the chandelier is in this luxurious, modern, classic kitchen.

It is among the most suitable. With the kitchen island made of the finest black wood, the entire kitchen look is classy.

The kitchen chandelier is made of high quality metal that looks shiny and tasteful. The choice of materials hopes to disperse the rays created by the chandelier or lamps.

Undoubtedly, the selection of kitchen chandeliers enriches the modern and graceful kitchen that uses high quality wood. We welcome the kitchen chooses the simple but fashionable chandelier. This keeps the kitchen spacious.

The kitchen chandelier is completed with the ingenious holder. The whole chandelier style looks very nice. The selection goes perfectly with that romantic side that can make you feel like a princess waiting for breakfast to be served.

Such a small room, but with top-notch vintage accents.

The chandelier exerts a very refined and beautiful design. The chandelier holder is different from the previous examples. This ninth example seems to be more complex and trending. The latter relates to the lamp composition, which has a graduated effect.

All in all, the kitchen chandelier rounds off the tasteful, classic quality of the kitchen.

We therefore call this a regal kitchen chandelier that is used given the overall chandelier design. The chandelier uses some antique metal candle holders. The candle or lamp composition looks complex.

In addition, the chandelier has the graceful holder that dangles just above the dining area. The chandelier is indeed a luxurious decoration for that soft vintage kitchen.

That sums up our kitchen chandelier ideas in this article. Next time, choose one that suits your kitchen style and budget. 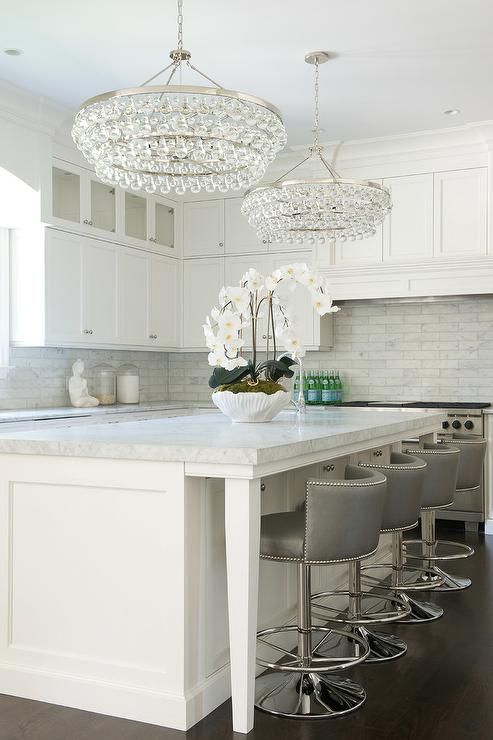 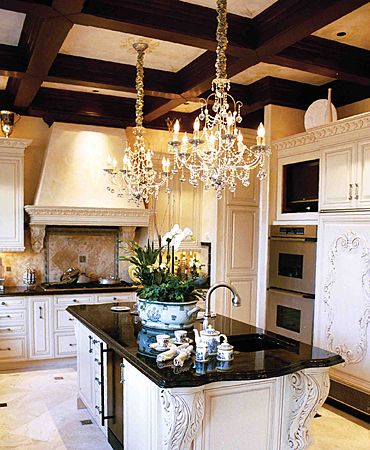