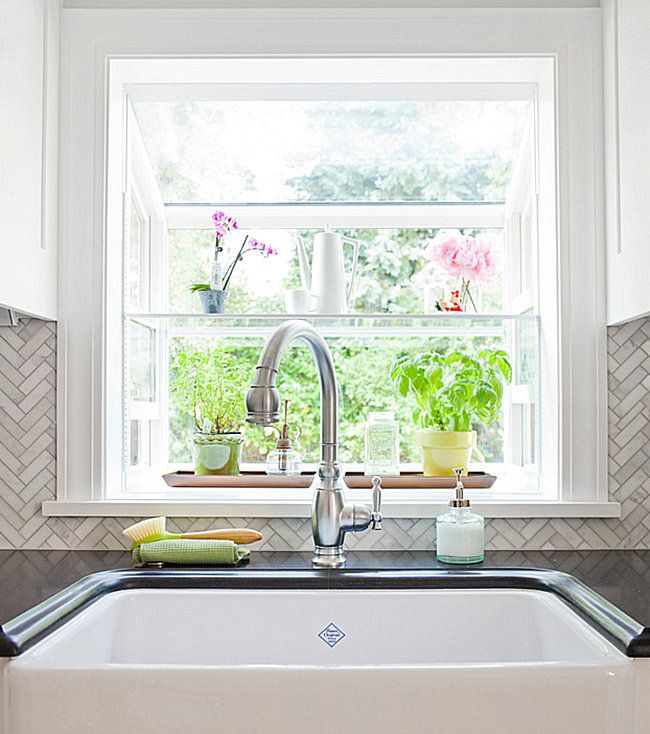 KITCHEN WINDOW IDEAS – Ventilation is a must for your kitchen furnishings. A kitchen window and door act as common ventilation and let fresh and natural air and light into your kitchen.

Both the door and window pave the way for smoke, smoke, dust, and dirt to leak out of your kitchen. You can continue to cook or wash dirty dishes while your lungs are clear of smoke or dust. There are a few things to consider when setting up the kitchen window.

So we collect the ideas together with certain cool looks that give the kitchen windows added value.

Regardless of whether your kitchen occupies a small space or not, please make sure that the kitchen has ventilation facilities. In this kitchen a window unit is set up, which consists of two window parts. Each of them has six squares as simple ornaments.

The window has no curtains, but rather stepped edges that mark the strong feature. The white painted window matches the theme color of the kitchen, which is also white. The window has a modest, thin holder on which the plant sits.

This simple window concept is enough to let fresh air and light into the kitchen.

Similar to the first idea, our second proposal involves a window unit that is made up of two parts. The window area takes up a longer space than that of the first idea. So the window looks bigger.

Each of the window parts has a door that can be opened or closed, similar to a door in a living room. As soon as they are all open, the window lets fresh air and light into the kitchen. At the same time, smoke and dirt can leave the kitchen naturally.

That hopes so much for your health while you are spending time in the kitchen.

Probably one of the most popular windows in many country kitchens. The kitchen layout includes a space for a window element, which is in two parts as shown in the picture. For a change, the window surrounding the spot is painted in soft green.

The window painting follows with the overall picture of the kitchen, which appears natural with the material wood and the choice of color. In addition, the window is completed with the green curtains.

The curtains can be spread out at will.

In contrast to the first three ideas, our fourth tip is a little different. There are two windows that do not fall into one window unit. Each of the windows is separated by the tiny concrete wall.

The windows face the sink in a relatively limited space. Each of the windows is covered with a curtain made of thin woodcuts. The choice of curtain adds to the warm feeling of the window.

The window style is one of the favorites in the modern kitchen as the window looks minimalist and trendy at the same time.

This kitchen treats the window like a baby. Beautiful decorations color the window. The window unit consists of two partial windows that take up sufficient space. We believe the curtains are handmade.

The curtains show real love from the residents of the house to the window. The window has a special cover with the white wooden plank that looks vintage. At the top of the chalkboard are the FAMILY letters and cute decorations.

Despite the simple window design, the ventilation somehow makes the kitchen personal and homely.

Our sixth idea fits into a large kitchen. The kitchen maximizes the long wall to a window unit, which consists of three sub-window units. No curtains stain the window. The window style adapts to the rustic kitchen style.

As such, the window is bounded by the pieces of wood. Graduated margins do not appear in the window. The kitchen prefers to keep the window simple to create a spacious and relieving feeling.

And as you can see, the entire kitchen relieves the hearts.

As far as we know, not many black curtains stain the kitchen windows. From this point of view, we therefore describe the seventh idea as impressive. The combination of a simple window and a black curtain looks graceful.

In addition, the window has a special cover with the thin space to accommodate the flowers and the candle.

In fact, choosing a vintage kitchen requires careful design, which adds to the budget. The classic kitchen window challenges those of you who want to recreate the complete look of a vintage kitchen.

This kitchen offers a seemingly affordable kitchen window style. The window consists of two sub-windows that can be opened and closed. The simple window concept is covered by the graceful curtains.

The curtains and the entire window area give the kitchen a classically elegant look.

A typical kitchen concept in a modern and minimalist house. This kitchen chooses a window pane to create a spacious feeling, especially if the house takes up small or medium space.

The window pane remains empty, with no curtains. The model ensures optimal daylight in the kitchen. At the same time, you can see what is going on behind the glass. The window pane rests on the rectangular lower glass window for ventilation.

Open and close the parts to let in fresh air, smoke and dust.

The classic tone strongly fills the air of the kitchen. Similar to the eighth idea, our last proposal is also inspired by the interior design of the vintage kitchen. This time the concept looks simpler.

The kitchen consists mainly of white and brown. As a variant, the kitchen sets the window so that it looks special with the thin holder for holding the plant. Our attention mainly goes to the curtains that use black and yellow.

The combination stands in contrast to the simple kitchen and looks pretty and delightful. 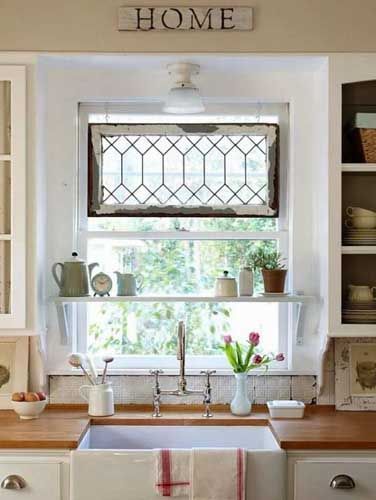