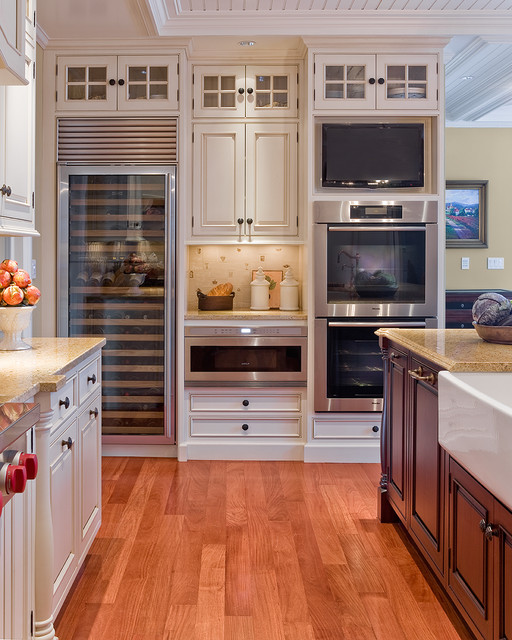 KÜCHENTV IDEAS – We know very well that while cooking or washing dirty dishes in your kitchen, you always want to enjoy yourself. There are times when you have to wait a few minutes for flour to become bread.

During this time, some of you may want to see some entertainment. Despite the rapidly growing entertainment content on a smartphone, watching shows on TV remains a favorite for many.

We’re going to describe the benefits and introduce our 10 best ways to put TVs in your kitchen.

It is better for you to put such a TV on the kitchen table. With this positioning, you can enjoy TV shows outside of the main kitchen area. Your attention while cooking or washing dirty dishes is not interrupted.

This kitchen table intentionally offers a small space that can accommodate a small television, probably 14 inches as seen here. There is a DVD player and a smartphone holder near the TV. The desk is equipped with a chair that you can sit on.

When you’re not using the TV, turn it off and you can go back to work or study.

Don’t miss a single episode of your favorite series on the go. Take the TV with you when you and your family are on vacation. Simply move the TV backwards as shown here.

This television is carried along with important kitchen appliances and utensils in this motorhome. You will likely need to consult with a technician first about how to position the TV so that it is not damaged while you are driving.

The television allows you and your family members to watch the shows and enjoy delicious meals during street breaks.

This large kitchen dedicates one of the cabinets in the upper segment to the placement of a television. The TV is with a table and chairs in front of the dining area. The placement allows you to watch TV shows on the television while seated.

TV positioning is safe for your children. At this distance, the TV positioning will not harm your eyes. While you are busy preparing food and drink, you can enjoy your favorite shows on TV.

You can also turn on the TV when you have to wait for the ready-to-eat food ingredients.

For this example, television seems to be a necessity. This outdoor kitchen chooses this large flat screen TV that is hung on the kitchen wall. The television is set up with the small fans above the fireplace.

You can enjoy TV shows on TV from your chair. You can invite your family members or relatives to spend time in the kitchen while you talk about the TV shows.

One look at the picture shows that this outdoor kitchen serves as a vacation spot. However, the TV ensures that you can still digest the TV shows you like the most.

Turn on your favorite cooking show. With this television positioning, you can learn any new cooking recipe from the show. While the show is on, you can put it into action on the kitchen peninsula.

The kitchen TV appears to be medium in size, probably 21 inches. It’s hanging on the kitchen wall. When the cooking show is not on the air, you can watch the programs on TV while washing dirty dishes.

Your children or spouse can sit in the chairs and watch TV programs while you prepare food and drink.

TV in the office kitchen

This office completes the office kitchen with chairs and television. The television can be seen on the back. It’s hanging on the kitchen wall. The seating arrangement resembles a family living room.

The television hopes to entertain the office workers over lunch or during the afternoon breaks. While watching, employees can chat and talk about what they see on TV.

We applaud the television positioning that is surrounded by the windows. The workplace provides fresh light and air while the workers enjoy a television program.

In this picture at least three rooms are connected to each other. There is the kitchen, the dining room and the living room. What they all have in common is the television that is hung in the middle of the kitchen wall.

The TV looks flat and very big. With the television form, whole family members can see clearly from all sides of the kitchen, including from the kitchen. The TV is near the large window which allows natural light and air.

Television positioning can include all family members who gather to watch television programs or participate in other activities.

Watch TV news while standing? Why not? This kitchen uses such a small area above the range hood to place the television. This is an unusual type of television positioning, but it looks economical and clever.

The TV looks medium in size, probably 21 inches. With the flat screen, the television does not take up much space. You can look at the screen and see what is going on in the world today while you prepare your breakfast.

Spacious and minimalist. Our ninth proposal takes up a lot of space and maintains the simple design and light material. A large, flat television with the small plants underneath hangs on the gray-painted wall.

The television is placed above the cooking area. While you are sitting in one of the chairs, you can watch TV programs on TV. Or just entertain yourself with your favorite comedies or TV dramas.

Cooking yourself is no longer boring.

This TV sits between the cabinet and the door and looks like it’s floating. The positioning of the TV looks unique as it doesn’t face the hob or sink. This positioning seems to invite you to take breaks to watch TV shows.

Our idea again suggests placing the TV near a door or window to allow natural light and air. This is how you stay healthy in the kitchen, be it alone while cooking or watching TV. 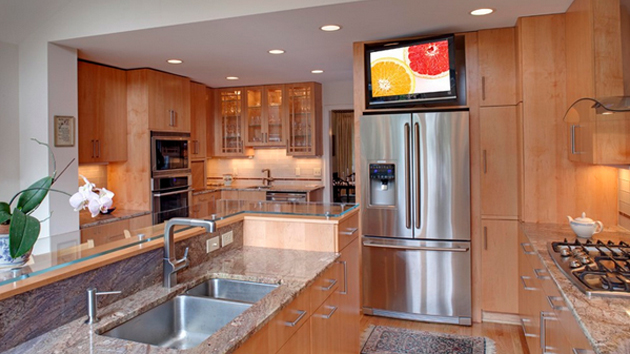