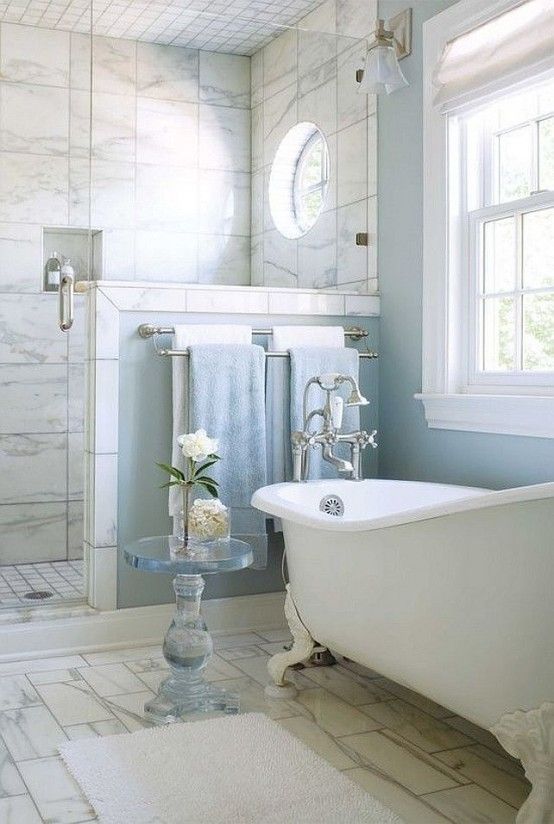 SHABBY CHIC BATHROOM IDEAS – Do you have old furniture or a bathtub? Don’t waste it. Use the materials as part of a planned shabby chic bathroom. Bathroom style has grown in popularity due to its iconic beauty.

Old but graceful. That sums up the Shabby Chic bathroom model. We especially admire the bathroom design, as the model combines a used product with neutral colors. Mixing and combining becomes the key to a shabby chic bathroom. Read below:

A wooden ladder is common in every household. The bathroom uses the ladder without cutting any part of it. This makes the ladder look tall and acts as a hanger. No painting is required on the ladder.

The bathroom chooses the wooden window that looks old-fashioned. Simply clean the window and paint it white. The bathroom takes up the natural looking wooden floorboards. The bathtub looks vintage with the claw foot.

As for instant embellishment, the bathroom hangs the chandelier which looks lovely.

Most shabby chic bathrooms opt for white. The neutral color ensures peace and comfort, as the bathroom shows. The bathtub actually looks modern, but with the claw foot.

While the shabby chic features come out of the dresser. The segment contains a vintage table and chair. The bathroom uses the recycled door as a storage room. Another door serves as a decoration.

Paint the furniture white. Then hang up the chandelier lighting and colorful glasses for refreshment. The bathroom feels very nice, although it picks up on the white atmosphere.

This one looks fantastic. From the bathtub to the washbasin, the bathroom uses the remains of existing bathroom furniture and basics. The shabby chic bathroom is painted white as seen from the door wall.

The object feels natural. The bathroom selects the squares that will stay as they are. No repainting that we see from the decoration. The bathroom uses the partition to divide the bathroom.

The sink area acts as a dresser. The segment selects old, small, pretty items like the chandelier and sink accessories.

We admire the Shabby Chic bathroom model because the design maintains the generous feeling of space. The bathtub and mixer show that the bathroom combines old and new bathroom aspects.

It looks creative, but the bathroom adds the function of the fabrics. The bathroom plays with fabric patterns. The blue, simple fabrics harmonize with the blue and white clothing.

The door partition creates a strong classic tone. We recommend the example for those of you on a budget and looking for vintage items. Plus, the bathroom seems to be suitable for you who don’t like to house a lot of small accessories.

Gorgeous and lush. You’ll need to put a large budget on finding bathroom items unless you already have them. The bathroom first chooses a modern and large room.

Later, the bathroom completes the area with the old items, from the wardrobe to the chandelier lighting. While the bathtub looks modern instead. The bathroom contains the dressing area which looks vintage and beautiful.

The example really suits female owners as it has the beautiful design that comes from the furniture and decoration.

In fact, a shabby chic bathroom usually chooses neutral colors like white. But of course you can also apply your own favorite for a special shabby-chic bath flavor. The example chooses the soft yellow tone.

The choice of color makes the bathroom shine, but does not attract attention. The bathroom houses the recycled bathtub. The washbasin also looks like second-hand. The item looks comprehensive with the drawers and cabinet.

The bathroom feels comfortable as it is next to the window with the living flowers.

As another top example, we take up the shabby chic bathroom, despite the narrow space. The narrow area is filled with old, reconditioned items that show how well cared for they are.

We are referring to the rusty table with the pink flowers. The used ceramic is used to store the items in the corner. The chandelier lighting also looks vintage. While the ladder is not that old.

The bathroom shows the classic bathtub as the centerpiece of the example. If you paint the bathtub with the brown shade, the area becomes warm.

If you can’t find cladding or are on a budget, make your bathroom modern with ceramics. This example continues to set up the tiles that actually create a modern flavor. The same atmosphere prevails on the bathroom floor.

The shabby chic element comes from the door reflecting the items. In addition, the bathroom takes on the wardrobe, which also looks a bit vintage. The bathroom can be another option for those of you who want to combine modern and old tones.

The list of shabby chic bathroom ideas will be incomplete without these. The girlish bathroom in shabby chic will attract female bathroom owners. The combination of pretty things and classic objects is what makes the bathroom so attractive.

The bathroom accommodates the vanity, which looks classic with the small drawers. The vanity is repainted with pink. Even with the claw foot, the bathtub looks vintage.

The bathroom looks very chic with the pink floor, pink flowers, and fabrics under the drawers. Vanity modeling talks so much about vintage design.

Pink and milky brownish hues make up the last example. The shabby chic style bathroom doesn’t take in a lot of old items. The bathtub and chair are enough to create the vintage bathroom.

The pink flowers complete the bathroom model in such a sweet touch. 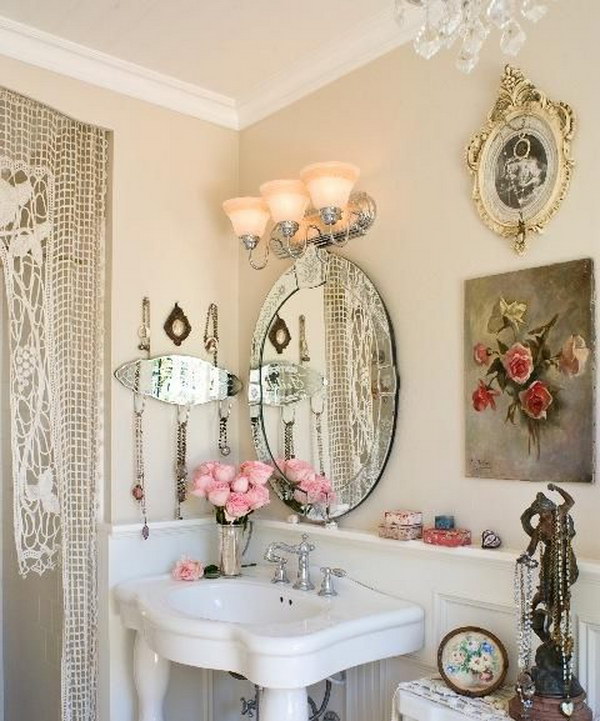 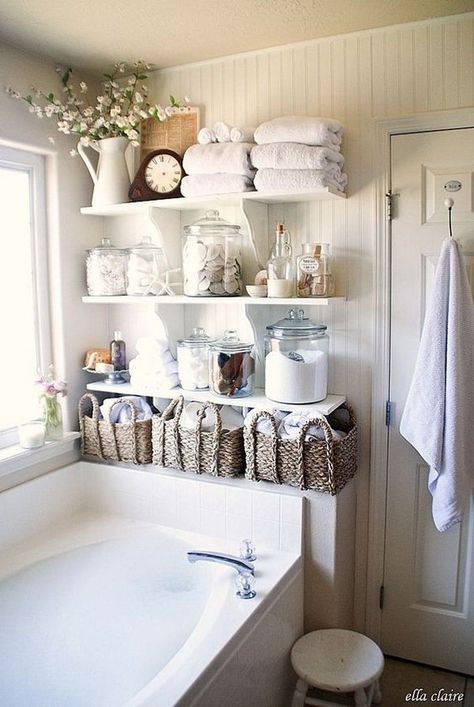